Gold was initially found in the Creek hence the name ‘Gold Creek’. The prospectors (Old Timers) went looking for the lode deposit that was the source of the alluvial gold being found in Gold Creek. At approximately 10,200 feet (3,500 metres) above sea level, the Old Timers found an outcrop of a vein and began to mine it. The mining that started out on the outcrop continued to be developed and became known as the Sacramento vein. Historical production records state that the ore from the Sacramento vein contained 10-12 times more Silver than Gold. The gold values were between 30-60 grams per tonne (1-2oz).

The task of transporting the ore 20 miles from 10,200ft high and down a rocky mountain was hazardous in winter when the snow cover was heavy and in spring when the mountain became very muddy. The process was also time consuming, dangerous and robbery of ore in transport was not uncommon. A.E. Reynolds resolved to halt mining from the Sacramento and develop a tunnel to access the Sacramento vein from a lower level. The tunnel would start from the Gold Links mine 9600RL and extend 6,000ft (1.2miles- 2km) from the to his stamp mill in Pitkin with the intent of intersecting the Sacramento vein along the way. Work on the tunnel began in 1902 at 9600ft (3,200metres) above sea level. This tunnel is now referred to as the 9600 adit and is orientated East-West.

At 1100ft from the entrance to the 9600 adit, the work crew encountered a vein, they worked on the vein for approximately 10metres (30ft) to the north and south. The same thing happened at 1700ft, 2100, 2150 and 3300ft. Each time a vein was crossed in the 9600 adit the work crew would split in two. One crew would continue with the original plan of advancing the 9600 adit to gain access to the Sacramento ore and transport it underground whilst the other crew would work the vein in search of a wide section.

The vein encountered at 2150ft from the adit presented as 23ft (7metres) wide and contained 6 ounces of gold per tonne. This discovery was published in the newspapers and in issue 10 of the Colorado geological survey.

Significant work was carried out on the 2150 vein.

The characteristics of the ore in the 2150 vein were differed from the Sacramento ore in that as a ratio, the 2150 had bigger gold values than silver whereas the Sacramento was the reverse. Production records state that the 2150 produced between 1.5 and 10 ounces of gold per tonne. Approximately 1200ft (400metres) of the vein was drifted on and stoping increased in height the further north the miners went. The highest stope is the northernmost stope known as ‘Digger Heaven’. The Digger Heaven Stope yielded the highest values of gold of any section in the mountain at between 3-14 ounces of gold and was stoped for approximately 350ft (115metres). This was all being done using hammer and tap and the work was dangerous.

The vein encountered at 3300ft from the adit was also worked for approximately 160ft north and south. The ‘old-timer’ records claim that the metallurgical composition of the ore at the 3300 led them to believe that the 3300 was the southern extension of the Sacramento ore-body.

It is stated that in 1912, at a time when he was advanced in age, A.E. Reynolds became aware of the organized theft of ore by his workers. At that time, he had several mines in the Colorado Mineral Belt that spanned an area of 200 miles (320km) along with the farmland required to supply feed to the mules and horses that transported ore. A.E Reynolds had no heir apparent to continue the demanding task of running several mines, so he closed the Gold Links mine down. The 9600 adit got to approximately 4,500ft (1.5km, ~1 mile) and never daylighted in Pitkin.

Since the closure of the mine in 1912, there have been some sporadic workings from people that have leased sections of the mine from the Reynolds descendants.

All of this work has focused on the northern section of the 2150 vein and all of it being undertaken less than 100ft (33metres) below the 9600 adit.

Production records show continued high grade ore being shipped from these production campaigns but with the level hitting the water table work was deemed difficult and unsafe and therefore abandoned. 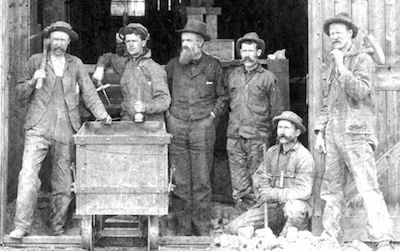 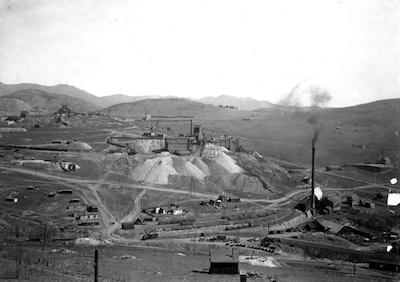 In 1939, a geologist named Carrey walked up the side of the mountain above north of the area where the Digger Heaven stope is located.

An outcropping vein was identified some 300ft (100metres) higher than the last known underground workings on the 2150 vein. It took Carrey two years to find the finance to commence mining this outcrop which became known as the ‘Upper Gold Links’ adit. Production records between 1941-42 show high grade gold shipments to the smelter that are comparable to the ore produced from the 2150 vein at lower levels. Mining ceased in 1942 and recommenced for two years at the end of WWII. In 1946, the old timers lost the vein and without the benefits of technology were unable to find it again.

In 1978 GoldSec undertook minor drilling. They intersected a section near the Sacramento vein at approximately 100metres deep that had 85grams per tonne (2.5oz). Other drills were between 3-31 grams per tonne (.1-1oz).

Arriva Minerals then conducted an extensive surface sampling program in search of copper. Several of the samples assayed returned high values of gold.

In 1982 Ivory Oil had similar outcomes. The Ivory Oil holes targeted the 2150 vein underneath the old 2150 working and the intersections were better than the GoldSec results. Ivory Oil’s C8 hole had a 105 gram per tonne (3.5oz) intersection over 1.5 metres (5ft) approximately 100ft (33metres) below the 9500RL workings.

In each case, the failure of the companies to fund the project resulted in the property being handed back to the descendants of A.E.Reynolds.

In 1984, the Gold Links Mine was leased by Bill Gydesen.

Gydesen owned or leased other mines in this region including the Lucky Strike Mine and Mill. The price of gold varied greatly from time to time and work was carried out on the properties spasmodically until the passing away of Bill Gydesen. During this time, Bill’s son Bob developed a 330ft raise (100m) by hand in an attempt to gain access to a section of the mountain south of the 2150 vein. This was an enormous task and Bob was injured in the process. On recovery, Bob Gydesen continued in the same fashion as his father until the price of gold soared post the GFC.

Bob Gydesen was successful in identifying a JV partner with enough money to rehabilitate the Gold Links mine and install rail, water, air, power, build structures to house tools, acquire trucks and earth moving equipment and generally prepare the site for development. The JV also undertook a major refurbishment of the Lucky Strike Mill. The JV fell apart in 2013-14 when funding ran out and the price of gold retreated from its highs. Bob Gydesen took back the Lease on the Gold Links whilst the JV partner Mr Kerry Vinci kept ownership of the Lucky Strike Mine and Mill.

Dateline has now consolidated ownership of both of these assets along with the freehold land that hosts the mine and the mill.

Since 1902, no mining has ever taken place at the Sacramento vein, Reynolds deemed the Sacramento vein rich enough to undertake the development of a 6000ft tunnel to gain access to the Sacramento ore from underground. Reynolds did not start the development of the 9600 tunnel in an attempt to discover the 2150 vein or any of the other veins that were found. The 2150 vein was discovered by accident and presented as a wide vein. Several other veins have presented as narrow in the 9600 tunnel but have never been drilled or explored in any way.

It is Dateline’s belief that the area warrants thorough exploration.

Fortunately for Dateline, technology has advanced to a point where high-grade targets can be identified much more easily and quickly than what was possible 10-20 or 50 years ago.

In addition to advancements in exploration technology, advances in Ore Sorting technology is expanding options for effectively mining narrow high-grade veins without risk of permanent dilution.